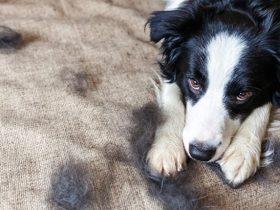 Although most people like to imagine them as the cute and cuddly toys they used to play with as kids, bears are some of the biggest mammals on the planet. In fact, certain specimens weigh as much as 1,500 pounds and exceed 10 feet, making them appear quite menacing.

If you want to know which bears you should always keep a distance from, read on. Here are the 10 biggest bears in order, including some info about their habitat and appearance.

Top 10 Biggest Bears on the Planet 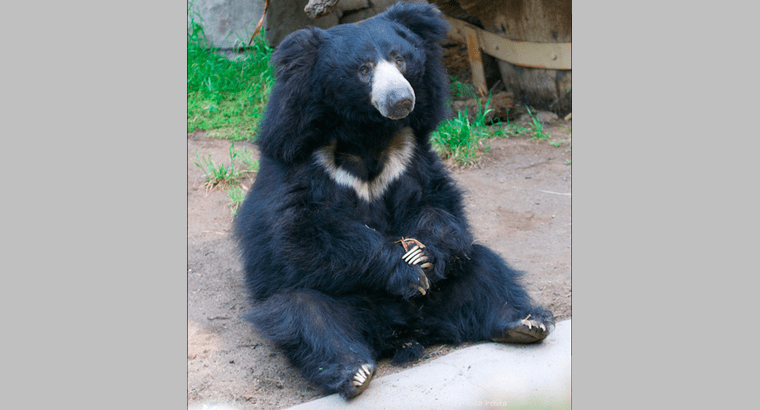 Native to the Indian subcontinent, Sloth Bears evolved from brown bears during the Pleistocene epoch. These bears are quite lanky, and they are easily distinguishable by their sickle-shaped paws and shaggy mane. They also have a protruding lower lip, which helps them suck in smaller insects during feeding.

Sloth bears are nocturnal animals, meaning that they hunt and are active during the night and lay low when it’s daylight. They are approximately 6 feet tall and weigh anywhere between 250 and 300 pounds.

These animals are omnivores. However, they usually only eat termites, fruits, and ants. Their curved white claws are perfect for digging up food from the ground, and that is their favorite way to find snacks.

Though Sloth Bears would never feed on humans, they are known to attack them if they feel threatened. Thus, it is best to avoid areas where these bears are active, which includes woods and mountains in India, Sri Lanka, and Nepal.

Unfortunately, these majestic bears are on the IUCN list of vulnerable species. Their numbers are dwindling every year, and it is happening mostly due to habitat loss and human influence. 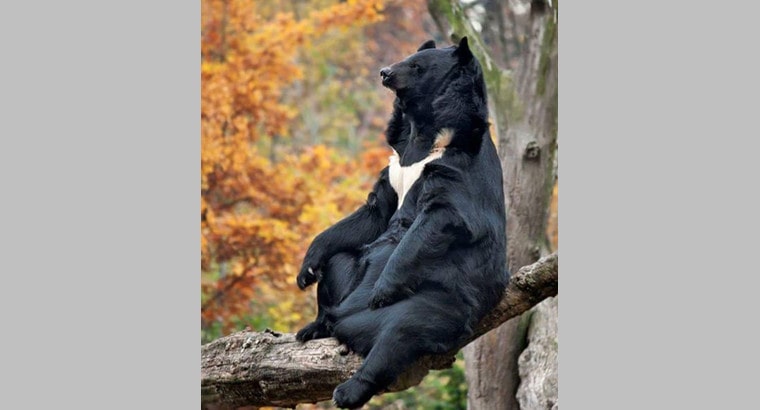 Popularly known as Moon Bears due to their white half-moon neck markings, these bears can weigh as much as 450 pounds. Adult males can be up to 6 feet tall, while females are usually slightly smaller.

As their name suggests, these bears commonly inhabit Asia. They are native to the Himalayas, but you can also find them in areas across India, Iran, Taiwan, the Korean peninsula, northern Japan, and eastern Russia.

Even though they are humongous and quite heavy, Asiatic Black Bears are excellent climbers. They love spending time high up in trees, where they forage for food and even play around with their cubs.

These bears are also a vulnerable species, mostly due to habitat loss and hunting. People seek these animals for their fur, body parts, and to make certain medicines from their skin and meat. 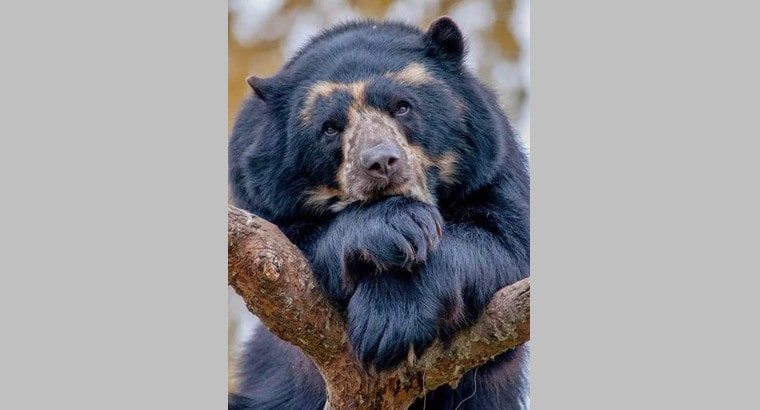 As the last living representative of the short-faced bear species, Spectacled Bears are quite rare. Their name comes from the unique light markings around their eyes, which resemble glasses.

Males usually weigh around 400 pounds and are 6 feet tall, while females are almost two times smaller and lighter. They are native to South America, and usually roam mountainous areas in Peru, Colombia, Bolivia, Ecuador, and Argentina.

Spectacled bears also enjoy spending their time in trees. They are expert climbers, and they feed on fruit, cactuses, bamboo, and palm leaves. Plus, they also enjoy hunting small rodents, deer, llamas, and even some cattle.

Just like most of the species on this list, Spectacled Bears are also listed as highly vulnerable by the IUCN. 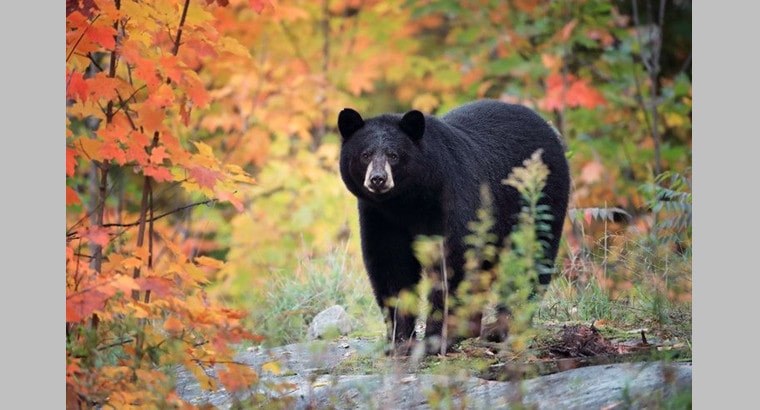 As their name suggests, these bears are native to North America. They can grow to be 7 feet tall, and they weigh around 550 pounds. About a decade ago, one bear from this species was measured to be 8 feet tall and to weigh 1,000 pounds. Though such astonishing numbers are extremely rare, they serve to paint a picture of how big some of them can become.

While most of these bears have black fur, certain subtypes can be brown or even fully blond. They all live in the northeastern and northwestern US, as well as in parts of Canada and Alaska.

American Black Bears usually feed on vegetation. However, they are known to hunt other animals as well. These include elk, moose, deer, and fish.

Luckily, these bears are nowhere near being vulnerable or extinct. Their widespread distribution ensures that they will live and thrive for a long time to come. 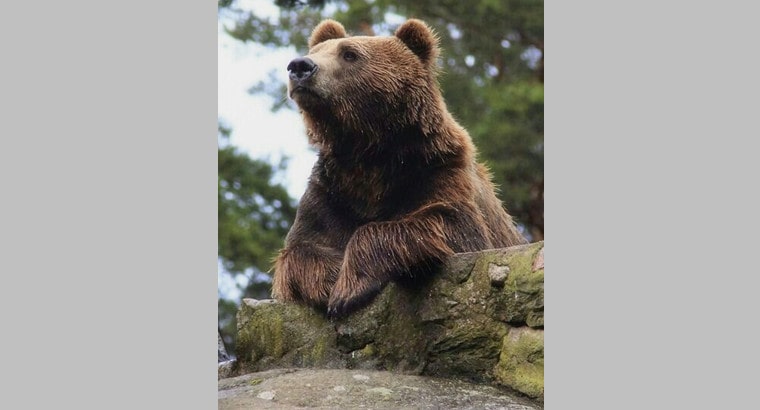 This ursid is one of the most common brown bears on the planet. Adults weigh around 650 pounds and are approximately 7.5 feet tall. Though their name is a nod to their habitat, they cannot be found all throughout Europe and Asia.

Nowadays, they mostly inhabit Russia, the Balkans, and all Baltic states. Still, there are isolated populations in a few other countries, such as Spain, Japan, and China. In these areas, the number of Brown Bears is decreasing exponentially.

These bears love hunting smaller mammals. If they find themselves close to humans, they also hunt livestock and cattle. However, they rarely attack humans unprovoked. As long as no one touches their cubs, they tend to keep to themselves. 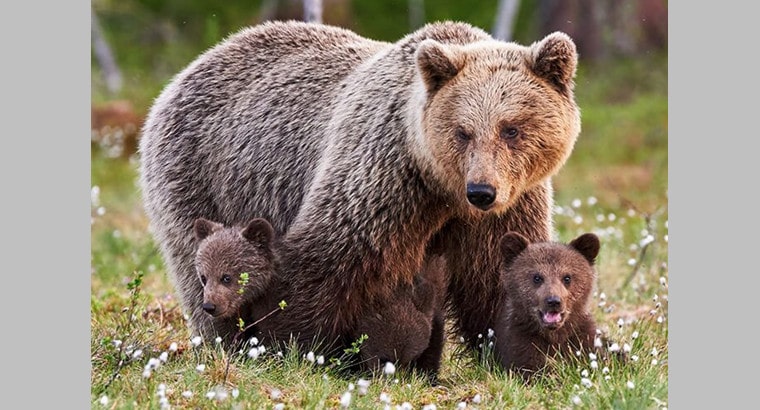 The Grizzly is perhaps the most famous subspecies of the brown bear on the planet. Its name comes from its terrifying appearance, including the long fur and sharp, pointy teeth that protrude from the mouth.

Grizzlies can grow to be over 9 feet tall, although most adults do not exceed 7.5 feet. They can weigh up to 900 pounds, with coastal specimens going over 1,000 pounds.

A century ago, these bears were widespread all around the US. Today, however, they are only present in the northwestern part of the country, Alaska, and western Canada.

These bears feed on large mammals and fish. They are considered to be endangered in Canada and threatened in the US. 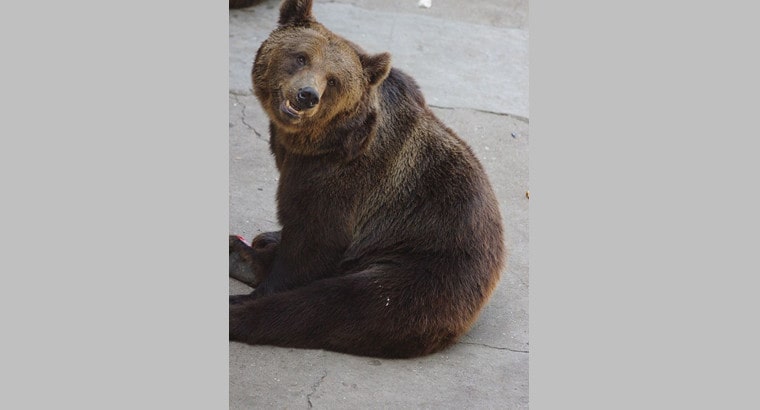 The Ussuri Brown Bear is closely related to Grizzlies. Their main difference is the color of their fur, as these bears are much darker. Ussuris have short foreheads and smaller heads, but the rest of their bodies are huge and covered with long fur.

These bears can weigh anywhere between 900 and 1,200 pounds and grow to be over 9 feet tall. They mostly live in Russia, the Korean peninsula, China, and Japan, and they feed on vegetation and all types of mammals.

Depending on where they live, the IUCN sees these bears as either threatened (China, Japan) or species of least concern (Russia). 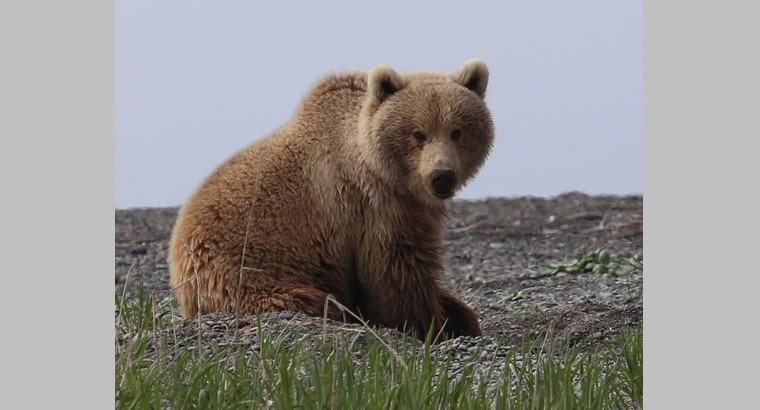 This species is the largest Brown Bear representative in the world. It can weigh up to 1,500 pounds and be over 9 feet tall. Although most of them are brown, some lighter discolorations also exist.

True to their name, these bears are native to the Kamchatka peninsula. You can also find some of them on the surrounding islands, including Saint Lawrence, Karaginsky, and Shantar.

These brown bears mostly feed on marine mammals, and salmon and trout are their favorites. As of right now, they are a species of least concern. 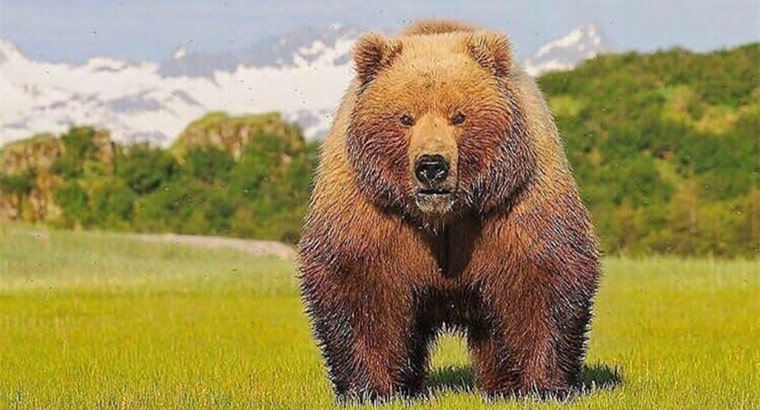 The Kodiak bear is the second largest ursid on the planet. Native to the Kodiak Archipelago, they can exceed 1,400 pounds and be taller than 9 feet. You cannot find these bears anywhere except in this Alaskan region.

Kodiak bears enjoy eating seaweed, salmon, berries, as well as any invertebrates living on the beach. Nowadays, there are around 3,000 specimens of this bear, but the number is steadily increasing. Thus, the bears are a species of least concern. 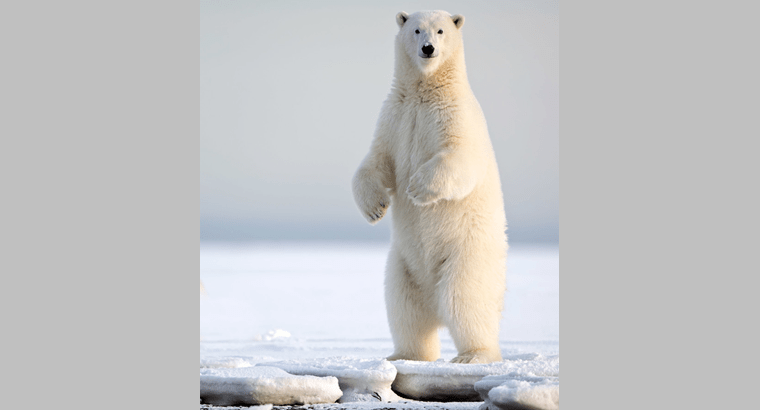 Naturally, these bears prefer cold areas. Thus, you can find them in the Arctic Circle, as well as certain areas in Russia, Canada, Norway, and Alaska.

Polar bears have the unique ability to swim and cover long distances in freezing water. This skill allows them to hunt for food and change habitats easily. Furthermore, they feed on meat more than any other bears on this list, mostly due to the fact that the majority of plants cannot survive in such cold regions.

Although there are over 30,000 Polar bears in the world, they are a vulnerable species. The reason behind their status is climate change, pollution, and human influence. If global warming doesn’t slow down in the near future, the number of these bears will decrease exponentially, leading to their extinction. 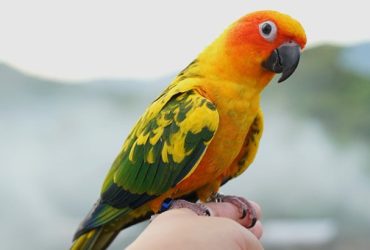 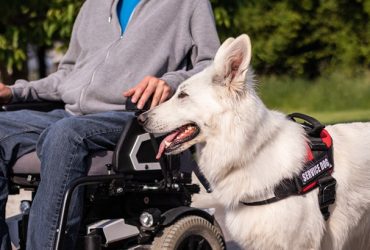